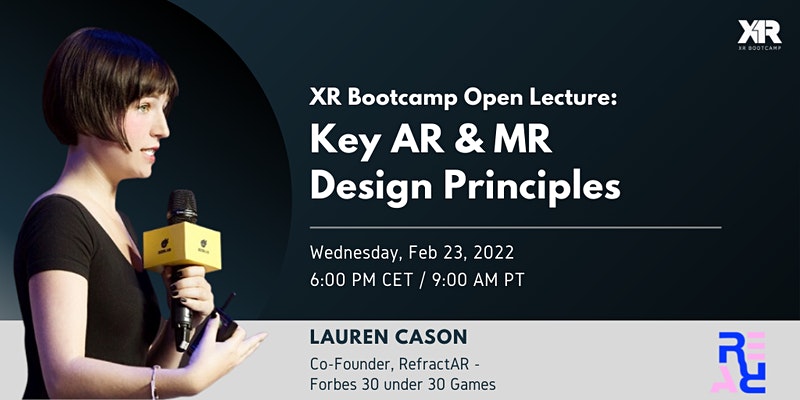 This open lecture is part of the Mixed Reality Hololens Master Class.

Lauren Cason is the official Lens Creator for Snapchat, was selected to top XR installations 2019 by Forbes, and is Forbes 30 under 30 in Games 2018!

She is the creative mind behind the „Cooking in AR“ Concept in the Hololens Class and is working on Hololens, Apple, Spectacles AR/MR platforms.

On Feb 23, Lauren Cason will be sharing:

Lauren’s talk will be followed by an interactive Q&A session with Fabian, Sean and Lauren. They are the #Hololens Master Class Development & Design masterminds and trainers:

Lauren Cason is a creative technologist based in Santa Fe, New Mexico. After getting her start in games interning at the MIT game lab, she went on to work on award-winning titles, including Monument Valley 2, Luna, and Where The Water Tastes Like Wine. After most recently working as a Prototyper at Apple, She is now the Creative Director of XR at Meow Wolf, where her team’s experience, The Garage, was selected as one of the top XR installations of 2019 by Forbes. She was also selected as one of Forbes 30 under 30 in Games for 2018 and is an Official Lens Creator for Snapchat.